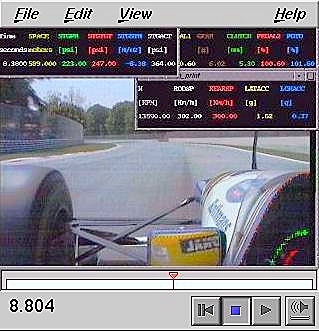 Missing evidence and endless years of investigation delay in itself strongly suggest a cover-up.

Mysteriously, after 90 seconds, the video cuts out the very second before wall contact - it would have disproven the pre-concieved suspension penetration myth.

Also, Williams staff were horrified to find the telemetry "blackbox" had several data channels physically cut, but were afraid (why?) to ever speak about it!

And the car was kept for a ridiculous 10 years by Italian authorities before giving it back to Williams to examine. Italy's notorious corruption provided the perfect environment for a cover-up.

The official (non-)explanation, by Italian forensic investigation, is:
Either;
1. car bottomed out due to cold tyres, or
2. steering broke.
But;
1. Bottoming and sparks are regular events - it's never caused a crash to anyone, anywhere! (including Senna himself on lap 1 and restart when tyres were even colder!) Anyway, the sparks appear AFTER he went straight on.
2. Crack in steering column was only 20% through - still had 80% integrity - it's not enough to compromise steering. And the video shows normal movement of the steering wheel, as compared with video of the previous lap. There is NO evidence the steering broke.

Official Cause of death was suspension arm penetration of skull. Again that never happened to anyone else, anywhere, ever.

So the official explanation claims 2 things - both of which have no parallel, ever! - Completely implausible!

Look at the video - the EXACT split-second (at 11.4 secs) the car stops turning and goes dead straight (cornering G-force goes to 0) Senna's head slumps to the left. (It's been suggested that with the quick loss of cornering G, his head would jerk slightly. But the slump is more pronounced than slight jerk, and worse - external video clearly shows his head never came up again!) Other internal videos with audio reveal the engine note merely trails away - NO brakes (and the telemetry shows no brake application but mere releasing of throttle (irregularly - in 2 stages - indicating lost consciousness)!

A split-second before his head slumps, a brief picture distortion occurs - indicating electromagnetic interference from metallic bullet moving at more than the speed of sound.

Helmet pics in the Senna Files website - clearly show a bullet hole in the visor - yet hardly any helmet damage. German newspapers published a photo of him taken just before he was put in the helicopter - he was grey (from blood loss) but the only visible damage was a small (3cm) cut above the right eyebrow. The doctor who recieved him at hospital (Dr. Maria Teresa Fiandri) gave an image very different from the rumours about his face; "He came to me pale but beautiful and serene. It is the image that I remember. He had a cut on the forehead, three or four centimeters, nothing more. But when we turn him, I saw that he had much blood. And I wondered: "But from where come too much blood?" It came from the back, the base of the skull." (She then said when they washed his suit (to return it to the family) - the water turned red. (In fact Senna lost 4.5 litres of blood - 90% of the body's total - ie. MASSIVE blood loss.)) So - small wound at front of head, large wound at back of head = Bullet! (Anyway: Suspension arm is big and flat - not small and round like the hole in the visor.)

[Note: Tamburello was not a public access area - perfect location for a hidden sniper in the dense trees, with a river behind it.]

WHO?
1. Senna's death was planned for MAY 1 - the foundation day of the Illuminati in 1776. (Hence the GP wasn't cancelled after Roland's death, as it should have been.)

3. After Senna died, the sport actually became even bigger - it was actually good for business!

Senna's humanitarian character was in contrast to the Illuminati - as proved by the $100 million dollars - half his career earnings as the (then) highest paid sportsman in the world - he put into his ASF charity foundation! Looking forward beyond F1, as the biggest name in world sport, Senna could easily have become a powerful global political figure for philanthropic works - but the Illuminati don't allow that. Throughout history - good people have been murdered (Gandhi, JFK, Lennon, Princess Diana) as their popular appeal can threaten the interests of the high Elite.)