Two men wake up at opposite sides of a dirty, disused bathroom, chained by their ankles to pipes. Between them lies a dead man loosely clutching a hand-held tape player and a handgun. Each finds a tape the perfect fit for the player in their back pocket. They play the tapes. One is threatened, the other isn't. But they have a task: One must kill the other by 6:00, or his wife and daughter will die. They find hacksaws in a toilet, and try to cut the chains, but it doesn't work. They are the two newest victims of the Jigsaw Killer. In a flashback, we learn of Amanda, a girl who falls victim to the Jigsaw Killer. On her head is a mask, which is hooked into her lower jaw. There is a timer on it. Only one key will unlock it, and that key is in the digestive tract of her cell mate who lies paralyzed on the opposite side of the room. If she doesn't unlock the mask in time, her lower jaw will be ripped wide open. She survives, but her cell mate doesn't. Through a series of flashbacks, we learn of more victims, and of the nearly-successful capture of the Jigsaw Killer, who doesn't actually kill his victims. Instead, he finds ways to make them kill either themselves, or each other, and he thinks the entire 'game' out perfectly, with no other ways out. Or so it would seem.

The Game Continues... In the sequel to the surprising hit horror movie, Saw, serial killer Jigsaw continues his killing games with a new group of victims. Detective Eric Mason (Donnie Wahlberg) tries to hunt him down, but what he doesn't know is that the game is going on right in front of him. And oh yes...there will be blood.

Jigsaw and his apprentice are dead, but their traps live on, when a SWAT Team is in the middle of their play land, with only one and a half hour to save themselves.

Jigsaw and his apprentice Amanda are dead. Now, upon the news of Detective Kerry's murder, two seasoned FBI profilers, Agent Strahm and Agent Perez, arrive in the terrified community to assist the veteran Detective Hoffman in sifting through Jigsaw's latest grisly remains and piecing together the puzzle. However, when SWAT Commander Rigg is abducted and thrust into a game, the last officer untouched by Jigsaw has but ninety minutes to overcome a series of demented traps and save an old friend or face the deadly consequences. 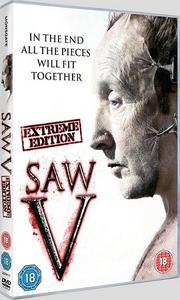 Following Jigsaw's grisly demise, Mark Hoffman, the final apprentice to the serial killer is deigned a hero. Meanwhile, Agent Strahm is tested and puts the pieces together. While Strahm realizes that Hoffman is helping Jigsaw, five seemingly unconnected people face a horrible lesson about teamwork. Strahm follows all the leads he can get off Hoffman, including the death of his sister and why he joined Jigsaw. Hoffman and Strahm circle each other until it boils down to a gruesome and bone-crushing finale

Genre: Horror | Thriller
Directed by:Kevin Greutert
Starring: Costas Mandylor, Mark Rolston, Betsy Russell, Tobin Bell
Special Agent Strahm is dead, and Detective Hoffman has emerged as the unchallenged successor to Jigsaw?s legacy. However, when the FBI draws closer to Hoffman, he is forced to set a game into motion, and Jigsaw?s grand scheme is finally understood.

As a deadly battle rages over Jigsaw’s brutal legacy, a group of Jigsaw survivors gathers to seek the support of self-help guru and fellow survivor Bobby Dagen, a man whose own dark secrets unleash a new wave of terror.