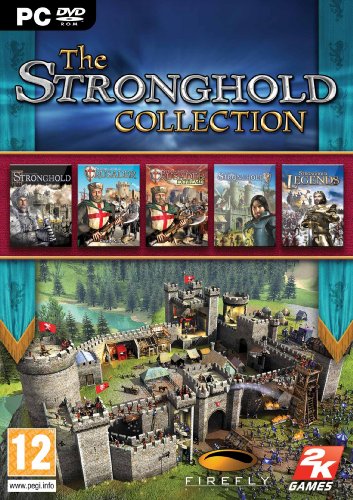 Stronghold - Experience the time of the great castles to, and you are your own lord of the castle! In the harsh Middle Ages, there was only one law - the law of the jungle. So consider all the surrounding dukes your castles with envy. Their duties as lord of the castle are many: Build a strong and well-fortified castle, build enough housing for your citizens, and entertainment facilities to keep them happy. And since everyone needs decent Lord also lots of gold, you also need to keep your economy going. But you never lose your subordinates' needs in mind. Dissatisfied citizens do not fight well. And you will have to fight, because all the other lords of the castle to see your prosperous society as a threat, of course, is to extinguish it. So build a strong defense, and cook the oil ever before - there is much to do!

Stronghold Crusader - The sequel to the award-winning bestseller Stronghold kidnapped strategists in the Arab world at the time of the legendary Crusades of Richard the Lionheart. Behind well-fortified castle wall, a steadily growing community thrives on gunsmiths, brewers and arrow makers while hanging around at the gates enemy assassins and go mighty war machine into position. In Stronghold Crusader traveling to Arab lands and live there, the heroic struggles of the historic Crusades. Your task is to build medieval desert fortresses and defend and fearless opponents to besiege. In the role of Richard the Lionheart to lead to heavily armored European Knights as a command or Saladin, sultan of Syria, huge Arab armies in the rugged terrain of the legendary Crusades of the 11th and 12 Century. Stronghold Crusader combines the most interesting aspects of construction and real-time strategy and will be released this summer.

Stronghold Warchest - The time for poetry is over ... now is the time to draw swords, man the walls, and defend your land. All of the castle-storming and rock-hurling excitement from the original series is here, along with challenging new maps and dangerous new enemies. Take up arms and employ catapults and battering rams to reduce the enemy castles to rubble. Reclaim the kingdom in Stronghold, venture forth to conquer the desert in Stronghold Crusader, and become Lord of both realms in the title game, Stronghold Warchest.

Stronghold 2 - The successor to the groundbreaking strategy game storm in April 2005, again the stockade - a beautiful, intuitive, and greater than ever before. Stronghold 2 takes players to a medieval world of unprecedented beauty, richness and realism. For the first time presents the mixture of building castles and siege battles in beautiful 3D look. In the castle, which is building the player, medieval life exists in all its facets: from colorful festivals, and jousting tournaments, spectacular torture tools for criminal scum to plague spreading rats, leaping in the garbage.

Uploading:
Available for users only

Fileserve:
Available for users only